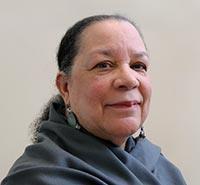 I grew up in a large, close African American family of teachers and doctors in Atlanta, Georgia. I left the segregated South for New England where I attended secondary school and college. In spite of all my travels since, this remains the most dramatic culture shock of my life. While taking classes in anthropology and psychology (including The Human Life Cycle with Erik Erikson), I began to explore the world with travel to Colombia, Hawaii (research on cross-cultural symptomatology at the state mental hospital), and Brazil (anthropological fieldwork on a religious pilgrimage). Upon graduation from college, I moved to Europe with extended periods in London, Florence, and Paris, then, after the death of Dr. King, returned home to find my place in post-Civil Rights America.

In New York City, I had a career as an editor in trade and scholarly book publishing where I worked with ground-breaking authors including Toni Cade Bambara, Alice Childress, Verta Mae Grosvenor, and Joyce Ladner. I later married and moved back to Atlanta with my new family where I was press officer for the High Museum of Art and wrote scripts for my husband's production company. From there we moved to Washington, DC where I was press officer at the Museum of African Art and was introduced to African film culture by Ethiopian filmmaker Haile Gerima at Howard University. Newly divorced, I decided to go to UCLA film school with my 7-year-old daughter in tow.

After two years studying Third World cinema and critical theory, I moved back to Atlanta where I became the director of the Atlanta 3rd World Film Festival and the King Center's Nonviolent Film Festival, while writing on film, producing documentaries, facilitating critical media literacy workshops inspired by the work of Paolo Freire, teaching at Spelman College, and traveling to Burkina Faso, Cuba, Canada, and other countries for film festivals and programming engagements. I produced and directed a film for the National Black Women's Health Project called On becoming a Woman: Mothers & Daughters Talking Together, attended that organization's retreats where I became aware of the high rate of trauma experienced by Black women, and also attended psychology seminars and workshops while deciding whether to return to my original plan to become a therapist. Having finally made the decision to change careers, I finished my Master's degree at Pacifica Graduate Institute with a thesis entitled Between a Rock and a Hard Place: The Shadow Sandwich and African American Individuation. While still in the Master's program, I worked at Hathaway-Sycamores as a parent coach, and as an intern accrued hours at Counseling West, Southern California Counseling Center, Kayne Eras School, Pacific Clinics Portals Community Connections and the private practice of Jerome Rabow. Gaining my license in 2009, I opened my private practice and continued to work in a psycho social club house in South Central Los Angeles with a population of adults with chronic mental illnesses. It is those clients who inspired me to pursue a doctorate in Liberation Psychology with a focus on complex trauma and how it might be ameliorated, healed, or, even better, prevented. I am currently researching new parenting paradigms and techniques for my doctoral dissertation.