How one dean is ‘schooling’ diverse crowds on social activism

Working in the mental health field is a natural progression into social justice work, according to Dr. Donald Grant, associate dean at Pacific Oaks College. A casual glance at the writings from the former science teacher turned social activist confirms his stance.

While entertainment and sports stars may be the most apparent depictions of success in the minds of today’s youth, Dr. Donald Grant was able to challenge and expand the variety of male role models, more specifically African-American ones, in his physical presence and earlier career as a middle school science teacher. 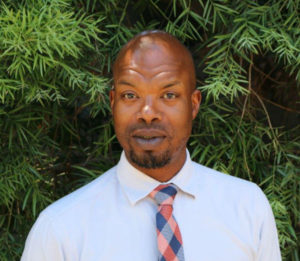 “We need more black teachers in the classroom,” Grant says, referring to a recent study from the Institute of Labor Economics that confirms African-American students from poor families are more likely to graduate from high school if they have at least one African-American teacher. “That study shows that their chances of staying in school increase, particularly for black boys. It was almost an exponential growth in the way that the attrition rates dropped. I was a sixth, seventh, and eighth grade science teacher in Baltimore, Maryland for many years. I know my presence in the classroom saved lives.”

The Hampton University alumnus used his interest in biology and other forms of science to lead him to pursue a Psy.D. in Clinical Psychology from Alliant International University. With both degrees under his belt, working in advocacy programs such as homelessness and foster care became a priority.

“Inside that work, I saw disparities as I had always seen disparity,” Grant says. “But seeing the depth to which that kind of inequity, pain, and lack of inclusion creates goes hand in hand. It’s in so much of everything that I do.”

While educational degrees are not mandatory to be effective as a social justice strategist, Grant does believe that academics should certainly factor into the equation.

“Having additional credentials helpto fight against institutionalized -isms—whether that’s  institutionalized sexism or racism—meaning that if I come along with talents and skills and a doctoral degree, it makes it more challenging to deny me entry. We need people to continue to gain access to shift conversations.

“If an individual of color is not in a room when a conversation is occurring, and there are misnomers or a lack of competence related to an issue being tossed around, we need that person of color at the table to be able to assist with the shift,” he says. “Absent these credentials and these degrees, we’re not invited to the conversation. To have a seat at the table and be impactful and affect true change, you must have consistent, completed education.”

His seat at the table included working for the L.A. County Department of Mental Health as a clinical psychologist, and teaching classes all over the county at Pepperdine, Loyola Marymount, and East L.A. College. By the time Grant got to Pacific Oaks in 2015, he knew that he wanted to expand his role as a faculty member.

“I wanted to work with clinical training sites to ensure that our students were getting the experiences that we needed them to have,” said Grant. “With this type of clinical experience, they’d be more confident that they’re going out into the world with a good set of experiences from an organization that focused on training students and whose missions were in some ways connected to ours.”

“The whole focus is to create and deliver trainings and consultations that help re-situate or re-develop business models, service delivery models, or entire organizations in a more ethical way that focused on culture,” Grant says.

In one of his most recent projects, Grant worked on commercial child sex exploitation trainings.

“People minimize the scope of child sex exploitation in the United States,” Grant says. “We see it as a very international problem when it’s highly domestic. We discuss the links and trauma associated with the high percentage of foster youth children being trafficked in the U.S.”

Another study that he’s working on looks at nations that have a predominant cultural identification of white European.

“In places such as Canada, Germany, Italy, and France, my company studies the relationship between non-immigrant black men and substance abuse, school attrition, homelessness, and unemployment,” Grant says.

The results from his study were presented in the U.K. two years ago, which confirm that there is a correlation between poverty and race when it comes to these factors. He is also keeping an attentive eye on the increasing studies of opioid addiction.

“We’re looking at a different demographics with opioid addiction and the overdose rate, particularly with what we just saw in Ohio,” Grant says, referring to the social media photo released where a couple had overdosed in their car while an adolescent boy was visible in the backseat. Dr. Grant is a bit concerned with the slanted attention that these studies have being given.

“I’m not saying that we shouldn’t be helping people suffering from addiction. But let’s not sit by and act like 30 years ago during the crack cocaine epidemic, we weren’t criminalizing those individuals who were primarily poor, black, and Latino. Now, there are organizations that are creating all sorts of programs and looking at this opioid epidemic with a different lens. Mindful Training Solutions focuses on the thread of equity and inclusion and being able to articulate that.”

“More importantly, there is also a global socio-cultural connectedness of Black men across the world, one generated, in part, by the views of Black men.”

Grant has a laundry list of publications where he’s written or spoken about social activism, including The Good Men Project; Ebony magazine; and one chapter, “Social Learning Theory and Strength Based Approaches to Counseling Adolescent African American Males,” in the book Counseling African American Males: Effective Therapeutic Interventions and Approaches. He’s also been interviewed on the “The Dr. Vibe Show“ and spoken at the 2014 Black Police Officers Association National Conference.

“It’s important to prepare your audience, and part of that is helping them understand their potential reactions to issues related to injustice,” Grant says. “Part of my work as a speaker is to understand ahead of time that everybody is not going to be immediately on board. I consider what I can do to ensure that the reception of the message I’m attempting to deliver is maximized.”

His advice for other social justice speakers is to first understand the audience: “Understand that you may know information that’s critical. However, be able to identify when, where, how, and what pieces of that information are appropriate at a particular time and how to create environments to make it such that people can hear you. That’s a challenge.”

But it is a challenge that Grant continuously takes on.

Dr. Grant is the Associate Dean at the School of Human Development. Learn more about the programs and concentrations available in this area and apply today.